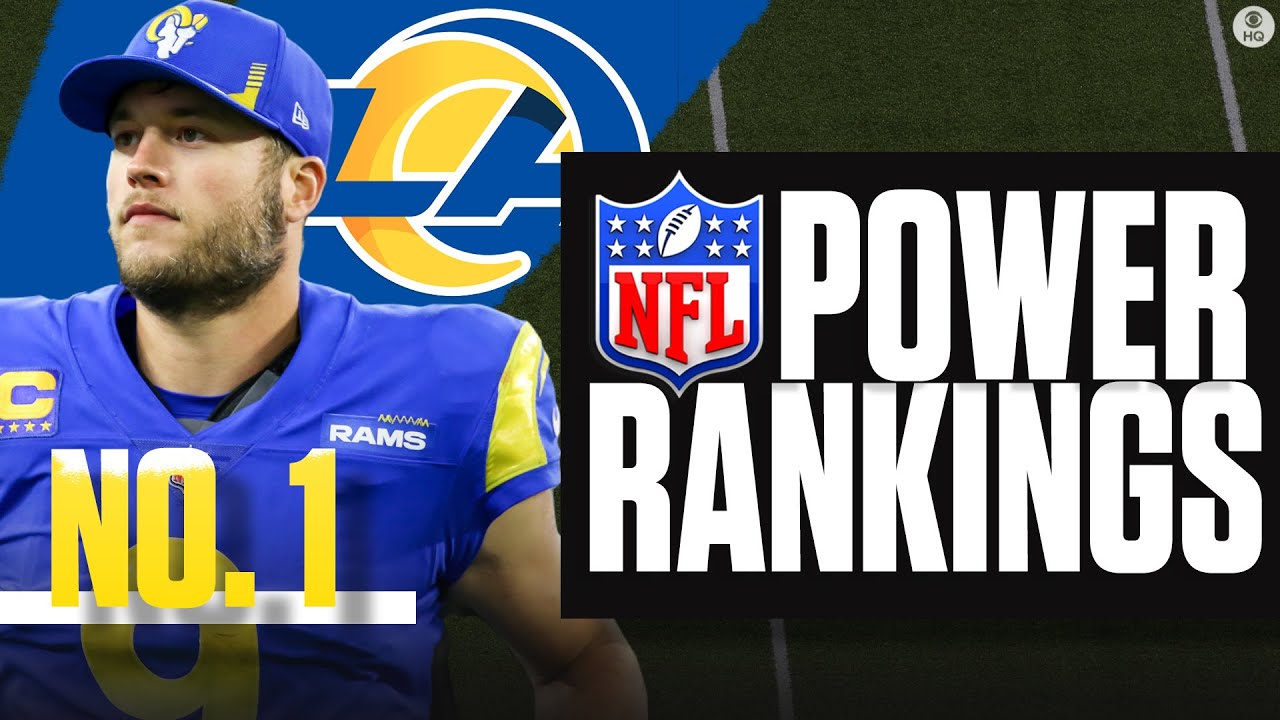 1. Rams: With the addition of Logan Bruss with the 104th pick in the 2022 NFL draft, the Rams solidified an already stout offensive line that ranked #7 (per PPF) at the end of 2021. The Rams resigned Joseph Noteboom, Brian Allen, and Coleman Shelton. Austin Corbett signed with the Panthers and it is anticipated Bruss will fill his role. Losing Von Miller to the Bills will certainly hurt. On the defensive side, signing Bobby Wagner will be a major upgrade at MLB’er. Allen Robinson should be able to fill in for the loss of OBJ. As long as the Rams have Arron Donald, Cooper Kupp, Matthew Stafford, and other core players, they still are at the top of the NFL.

2. Bengals: Maybe if they had next season’s offensive line for last season’s Super Bowl, the Bengals could have stopped Aaron Donald from closing out the Super Bowl. The Bengals should remain among the AFC’s elite after a depth-fortifying draft, though it appears the rest of their division is closing the gap. In the 2022 NFL Draft, the Bengals selected a pair of defensive backs with their first two selections, then spent their next two picks on offensive and defensive linemen. Clearly, the Bengals understood where they needed to improve and attacked those areas.

3. Bills: The addition of Von Miller will certainly improve things on the defensive side of the ball as will, first-round CB Kaiir Elam. Second-round pick RB James Cook from Georgia is a change of pace back who needs some strength to really develop into an every-down NFL RB. Like the Rams & Bengals, their core remains unchanged. The other AFC East teams still have a way to go to match the Bills’ roster.

4. Buccaneers: This offseason, Rob Gronkowski’s contract expired and he remains a free agent.  Additionally, it is being reported that Ndamukong Suh will not return for the Bucs in 2022. The addition of DL Logan Hall will provide some much-needed help along the defensive line. Leonard Fournette resigned as did Giovani Bernard which will keep the backfield in tack. With the departure of Bruce Arians, and the promotion of Todd Bowles as their head coach, the Bucs’ defense will remain tough. As for Tommy Terrific sooner or later, father time will catch up with Brady… as for now, it seems ‘father time’ runs a very slow 40.

5. Packers: The loss of WR Davante Adams is going to be felt. The 2022 draft was deep at the WR position and the Packers were wise not to over-reach with an iffy first-round selection. Drafting WR Christian Watson with the 34th pick in the second round was a solid selection. Standing at 6”4 and with 4.6 – 40 speed, Watson has all the tools to make an immediate impact. First-round picks LB Quay Walker and DL Devonte Wyatt who both played for the Georgia Bulldogs should shore up the middle of the defense.

6. Chargers: On paper, there is no question the Bolts have one of the league’s more talented rosters. The addition of Khalil Mack & Sebastian Joseph-Day will shore up their defense. Mike Williams, Keenan Allen, and the addition of Gerald Everett gives Justin Herbert plenty of offensive fire-power. I believe the Bolts are poised to be one of the breakout teams for 2022.

7. Ravens: With the No. 14 overall pick in the 2022 NFL Draft, the Baltimore Ravens selected Notre Dame safety Kyle Hamilton. The 6-foot-3, 217-pound Hamilton believes that he’s the best player available in this year’s draft. In addition to Hamilton, the Ravens selected Tyler Linderbaum with the 25th pick in the first round. Linderbaum was the highest-rated center in this year’s draft. In round 2, the Ravens selected David Ojabo would have been a top-15 pick had he not torn his Achilles at his Pro Day. The Ravens started strong in 2021 with wins over the Chargers, Chiefs, and Colts in their first 6 games. With the addition of three high-quality picks, Baltimore had an outstanding draft and is well deserving to be in our top 10 power rankings.

8. Chiefs: The Chiefs ended up making ten selections in the 2022 NFL Draft. In the first round, they selected CB Trent McDuffie from the University of Washington. McDuffie came to Washington as a top-10 cornerback prospect nationally after being named a second-team All-California selection his senior year at St. John Bosco High School. With pick #30 in the first round, the Chiefs selected EDGE rusher George Karlaftis from Purdue. The Chiefs’ biggest need going into 2022 was on the EDGE. He’ll be a good starting player in KC’s biggest area of need. He is a relentless player and should be a day-one starter. Western Michigan WR Skyy Moore, picked at 54th, has good ball skills but just average separation potential and certainly will not make up for the loss of Tyreek Hill.

9. Raiders: In one of the most surprising moves of the offseason, the Packers agreed to trade Davante Adams to the Raiders in exchange for first- and second-round picks in the 2022 NFL Draft. If the trade for Adams wasn’t reminder enough, their decision to decline fifth-year options on all three of their 2019 first-rounders was a clear signal that the Silver and Black are under new management. Look for Round 4 RB Zamir “Zeus” White to eat into Josh Jacobs’ touches.

10. Colts: With the second round, the selected Cincinnati Wide Receiver Alec Pierce. The 6-foot-3, 211-pound Pierce caught 52 passes for 884 yards with eight touchdowns. In the second round, they selected Virginia Tight End Jelani Woods. Woods. The 6-foot-7, 253-pound Woods caught 44 passes for 598 yards with eight touchdowns in 2021 at Virginia, where he finished his college career after four years at Oklahoma State. After acquiring QB Matt Ryan and CB Stephon Gilmore, the Colts added a few offensive weapons that may close the gap with the Titians.

11. Saints: Let’s not forget how close San Francisco came to reaching the Super Bowl courtesy of a stacked roster that could endure middling quarterback play. After a statement draft and signing of hometown S Tyrann Mathieu, New Orleans might have a better roster than those 2021 Niners – and QB Jameis Winston showed a lot of promise prior to his ACL tear. But the main question is how this organization adapts to the departure of Sean Payton.

13. Patriots: How best to sum up their “Strange” draft? A team that can’t develop early-round receivers took one in Round 2 from a school – Baylor – that doesn’t produce NFL-caliber receivers.

15. Browns: Still turbulence to navigate given the likelihood of a suspension for QB Deshaun Watson and lack of resolution around his predecessor, Baker Mayfield. But if Cleveland can tread water until Watson is ready to play – assuming he integrates effectively – this team should be dangerous.

16. Titans: They drafted some impressive players, but dealing Brown and taking Malik Willis as the presumed successor to QB Ryan Tannehill – and all that comes with that – hints Tennessee could be headed into a cocoon before molting into something significantly different.

17. Vikings: New GM Kwesi Adofo-Mensah has quietly but wisely upgraded a 30th-ranked defense since free agency opened, and it may be enough to row this franchise into a dark horse postseason berth.

18. Broncos: Can they reach the postseason for the first time since 2015 with a new coach and new quarterback while trying to navigate the AFC West gauntlet? Just maybe. Might even be a divisional playoff sweep if these four teams don’t beat each other up too much.

19. Cowboys: The 2004 Eagles are the last team to repeat as NFC East champs … and that streak’s probably going to remain intact given the limited impact it appears Dallas will reap from the draft and free agency.

20. Steelers: First-round QB Kenny Pickett could be an upgrade juxtaposed to the declining play of now-retired Ben Roethlisberger. Yet Pickett might not be much of an upgrade at all from Mitch Trubisky nor have the long-term impact Willis could. Gonna be fascinating to see how this unfolds.

21. Dolphins: With Hill, Jaylen Waddle, and Cedrick Wilson, Miami’s three-receiver set may be better than anyone’s. But can QB Tua Tagovailoa leverage it sufficiently to lift this team as something more than best not to qualify for the playoffs?

22. Cardinals: The six-game suspension to WR DeAndre Hopkins, whose absence at the end of last season coincided with this team’s collapse, explains the suspect deal for WR Hollywood Brown … short-sighted as that still seems given Arizona coughed up its first-rounder.

23. Jets: By all accounts, they “won” the draft, capitalizing on the remaining picks extracted from the Jamal Adams and Sam Darnold trades. Now, can a team that hasn’t been to the playoffs in 12 years nor been above .500 in seven actually win some football games?

24. Lions: After following last year’s winless start with a 3-3 finish, Detroit appears to be loading up nicely and should be ready to move on from biting kneecaps to delivering some body blows.

25. Seahawks: Quick history lesson – the last season (2011) Pete Carroll didn’t have QB Russell Wilson or Wagner … he still had a hungry, young team that featured a top-10 defense and went 7-9 with Tarvaris Jackson throwing most of the passes.

26. Commanders: Their draft haul supplements what really is a nice nucleus of talent. Just hard to forecast what lies ahead for a team that has such a huge X-factor component at quarterback, a position where fifth-rounder Sam Howell might wind up getting into the mix this season.

27. Jaguars: With Doug Pederson calling the shots and RB – not slot receiver – Travis Etienne poised to make his NFL debut, it’s almost like they’re getting four first-round picks this year after getting DE/OLB Travon Walker and LB Devin Lloyd, both potential defensive rookie of the year candidates.

28. Panthers: With their skill players healthy and first-round LT Ickey Ekwonu stabilizing the offensive line … Darnold and, very possibly, coach Matt Rhule is pretty much out of excuses when it comes to achieving forward progress.

29. Giants: Speaking of forward progress and excuses, the table also seems nicely set for QB Daniel Jones in Year 4 … even if a fifth-year contract option isn’t on the menu.

30. Texans: Headlined by No. 3 overall pick Derek Stingley Jr., this draft class’ first six picks could provide Week 1 starters for Houston, which seems to be out of dry dock as the franchise finally moves forward from the Watson controversy and former coach Bill O’Brien’s egregious roster mismanagement.

31. Bears: No issues with recasting your identity and potentially setting the stage for a big step forward in 2023. But couldn’t we be doing more to fuel QB Justin Fields’ development in 2022?

32. Falcons: GM Terry Fontenot had already acknowledged they’re “taking it on the chin this year,” and a draft full of players who might take longer to blossom than most suggest Atlanta is playing a longer game.